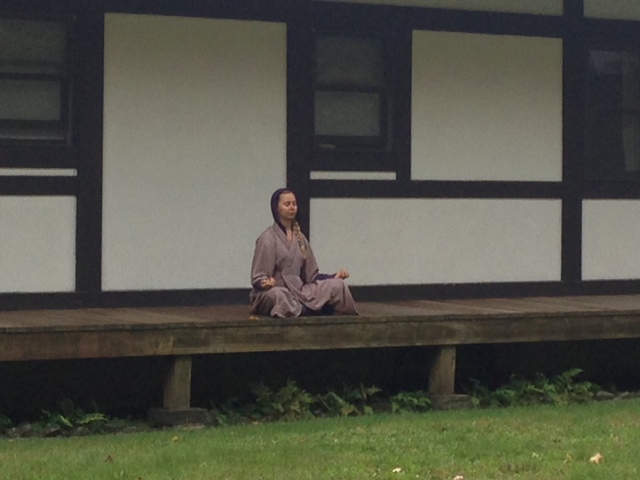 In Zen Buddhism, zazen literally "seated meditation" in general it can be regarded as a means of insight into the nature of existence. The instructions are simple, but the practice is endlessly subtle. Unlike many meditation practices, the purpose of zazen is not to become attached to a particular serene state, but to investigate what’s true in this moment, to know directly the mind’s habitual activity in the construction of experience, and open up to our inherent bright alert clear reflective nature. Zazen is immediate and straightforward, yet radical in its acceptance of conditions and penetrating wisdom. All of the Buddhist teachings are investigated directly through its practice, including the nature of suffering, the end of suffering and key to living an ethical life. (Kat took her lay precepts in 2018 and received the name Reigetsu - Spirit Moon)

The tradition teaches that the goal of Buddhist practice is an awakening to the deathless dimension of the mind, the deathless can be realized by reaching and examining the Original Mind. The distinction between Vipassana meditation and other styles of meditation is crucial and needs to be fully understood. Buddhism addresses two major types of meditation. They are different mental skills, modes of functioning or qualities of consciousness. In Pali, the original language of Theravada literature, they are called Vipassana and Samatha. Vipassana can be translated as “Insight,” a clear awareness of exactly what is happening as it happens. In Vipassana mediation, the meditator uses his concentration as a tool by which his awareness can chip away at the wall of illusion that cuts him off from the living light of reality. It is a gradual process of ever-increasing awareness into the inner workings of reality itself. Vipassana is a gentle technique. But it also is very, very thorough. It is an ancient and codified system of training your mind, a set of exercises dedicated to becoming more and more aware of your own life experience. It is attentive listening, mindful seeing and careful testing. We learn to smell acutely, to touch fully, and to really pay attention to the changes taking place in all these experiences. The object of Vipassana meditation practice is to learn to see the truth of impermanence, unsatisfactoriness, and selflessness of phenomena. (Kat sat Vipassana retreats in Thailand and USA and now leads Vipassana meditation at the Shantideva Center in Brooklyn. Kat took her precepct in Tibetan Buddhism in 2019 and received the name Thubten Khadro - Good Dakini)